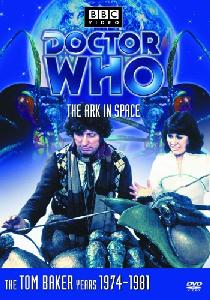 The Doctor and his companions land on a space station. Harry has done something to screw up the Tardis, and instead of landing on the Earth's moon, they've landed here. Exploring the station, they get separated.

Sarah winds up in a cryogenic freezer pod, while the Doctor and Harry try to find her. While they do, the Doctor spends his time mocking everything about Harry and his little brain, along with the whole of the human race.

They find her, but before they can revive her, something launches itself at them.

The Doctor here acts a lot like the Tenth Doctor towards his final years - preachy, bitchy, and with a contempt for those silly humans around him. And Harry just stands there and takes it, as though whatever the Doctor says is brilliant and he's a numskull.

This seems like a great excuse to write a character out for an episode or two, as they did with the Hartnell era. Have Sarah just sleep through an episode or two while the actress takes a holiday. I don't know if that's what happens, just saying it could.

Episode 2
Ok, so it didn't actually launch itself anywhere. It's a dead husk that hell out of a closet when Harry opened the door.

They wake one woman up. She works to revive Sarah. They find out the Earth has suffered a boom boom, but it was thousands of years ago.

Sarah wakes up and she's all woozy.

There are creepy-crawlies all over the station, and the slowly-awakening crew believe the Doctor is sabotaging them.

And they are going bonkers. Something happened during their long sleep, and they are changing into something ... else.

Seriously creepy, and it doesn't let up. I read somewhere this was like Alien, before Alien was made. And it's true, it's got that same feel.

Nice to see I was wrong about Liz going on holiday, because her character Sarah wakes up about halfway through this episode. Good thing, too. They couldn't have done the spin-off without her.

All in all, for the 150th episode of this project, I'm VERY happy. It was pretty much 100% pure awesome.

Episode 3
A recording plays through the station, a sort of pep talk from the leader of the sleep project, recorded thousands of years ago.

The commander - Noah - quits. He's going through a change into an alien thing, ad hides, so nobody will know. His second - Lila - becomes the new commander. She and the Doctor agree to work together and try to destroy the aliens.

Not quite as creepy as the last episode, but full of adventure and intrigue. And the Fourth Doctor is acting much more like the Doc I think of when I think of Tom Baker. His personality is settling, and starting to show onscreen. He's humorous, not a care in the world, like he's from some other reality, and only visiting here.

Another plan is hatched - Sarah is going to crawl through a conduit and electrify the whole station. This will electrocute the aliens. She is helped by the Doctor who acts like a complete asshole to get her through. But it works.

An army of the aliens is outside the station, sliding ever closer.

The humans are told to evacuate in a small shuttle. The aliens follow them - but it's a trick. The aliens get inside, without knowing the humans aren't really inside. It launches and blows up.

The Doctor, Sarah, and Harry decide to transport down to the Earth. They are going to see if it's ready for life once again.

I'm mostly ok with this. What bothers me is how unconcerned the Doctor is for Earth. It's not terribly long after Susan was left there, maybe a thousand years or so. It's entirely possible she'd still be alive, if regenerated. He doesn't even take a second to consider the possibility.

And, he's sort of an asshole to Sarah Jane. Sure, he had good intentions, but man, what an ass.

With that said, I got a thrill when he used his most famous line for the first time here: "Would you like a Jelly Baby?"