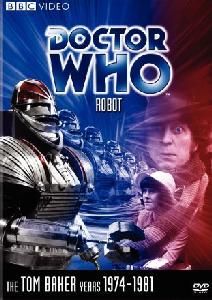 The Brig and Sarah Jane watched the Doctor regenerate. And it's not going well. We meet Harry Sullivan, who is acting as the Doctor's physician.

There's a scene showing the Doctor going through one costume after another, each more obnoxious than the last. He finally comes out with the costume we known him using, including the extra long scarf.

Sarah Jane has a chat with Professor Kettlewick, a man who has designed robots for the think tank, though he's now retired. He's totally the mad scientist type. Not getting what she wanted, she sneaks back into the think tank's building, where she is confronted by ... the robot!

Oh yeah, SO much fun to be had here. I'm loving this. And this Kettlewhatever professor dude is looking so familiar. I know I've seen him somewhere before. I'm just not sure if it's from an earlier time seeing this story or another story.

Tom Baker and Liz Sladen make a fabulous duo, and I'm looking forward to more of them.

Episode 2
The bad guys shut down the robot and Sarah Jane is safe. She returns to UNIT and tells the Doctor and the Brig all about the giant robot.

They go talk with the robot's creator, Professor Kettlewell. He looks So familiar.

The Doctor later goes off to meet the professor in private. It's a trap - the robot is waiting for him!

The Invasion. I think that's where I remember him from.

It took two times through to get through this episode, because I got so involved watching it, I forgot to really THINK about it. Nick Courtney is brilliant here as the Brig, and I think he and Tom Baker get on better than Nick did with either of his previous two Doctors. Maybe it's that feeling of old friends, or something. Whatever it is, it's just a joy to watch.

Episode 3
At the last minute, Sarah enters and talks the robot out of killing the Doctor. It goes outside, where soldiers fire on it.

Sarah and the professor go to a secret society meeting run by the think tank's heads. When they get captured (cuz it's Doctor Who, and that sort of thing is to be expected), the Brig and his men come in, guns blazing.

They take off, with Sarah and Harry as their captives.

UNIT tracks them down. The Brig, the Doctor, and others head towards an underground bunker where the bad guys are hiding.

The robot goes out, ordered to fight them. It threatens to destroy them all.

There isn't much here in the way of visual effects. And it's funny, the one big fx shot, which has the robot walking towards the screen, looks like a cartoon. It shouldn't, since this isn't a shot of the robot growing (That has to happen tomorrow, since it's the one thing I remembered about this story, and there's only one episode to go.), but it does look cheesy. Classic Who!

The Brig and Doctor are still working very well together, and the Brig actually listens to the Doc and takes him at face value. About time! How many times in the past has the Doctor been right about something, and when the Brig asks him for assistance, just ignores the time lord?

Episode 4
Sarah and Harry escape and grab the professor. The robot accidentally kills his creator and goes a little bit insane.

The robot goes full Power Rangers megazord thingy and grows to giant size, then goes on a rampage, destroying buildings in an attempt to mimic Godzilla. The Doctor races (in Bessie!) to stop it.

He kills the robot, then takes off on a voyage with Sarah Jane and new companion Harry.

Best line of the story - "There's no point in being grown up if you can't be childish sometimes!"

It was nice to see this new Doctor playing with Science! since that was such a huge part of the previous Doctor. And it's not something that happens very often with this incarnation. You know what else doesn't happen often? Bessie. I think there's maybe one more time we see her, and then she's mothballed until the reunion show.

Overall, a great introduction to the new Doctor, I think, and a nice intro to Harry.