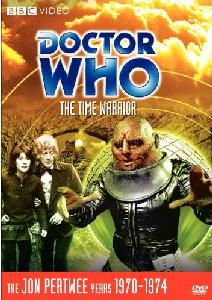 In the Middle Ages, men are arguing in a castle as a light falls from the sky. It's a Sontaran, and they quickly make a deal to work together.

In modern times, The Doctor and the Brig are attending a scientific conference. Half a dozen scientists have disappeared already. The Brig wants to find out why.

The Doctor meets Sarah Jane Smith, and it is instant chemistry. one of the other scientists disappears from inside a closed room, and SJS works with the Doctor to investigate.

The Doctor uses Science! to track down where the guy went, and it involves time travel (doesn't it always?). Unbeknownst to him, though, Sarah Jane Smith has tagged along. And almost immediately, she gets herself kidnapped.

While the Doctor watches in horror, one of the Sontarans removes his helmet to reveal his true appearance underneath.

There is a new opening credit sequence, and it's amazing, probably my favorite so far.

I'd really like to have a chat with Katy Manning (Jo) and there's just one thing I'd say: "THIS is how you play the Doctor's companion." From the opening frames, she is on, and she is genius. I'm loving every bit of this.

In a typical Who story, the action follows the Tardis. Wherever and whenever it is, that's what we see. This is not a typical story, and we see at least two different time periods, alternating back and forth. It held my interest throughout, and I can't wait for tomorrow's episode.

Episode 2
Sarah Jane escapes and runs into the Doctor. She doesn't trust him and runs off.

The Doctor goes in another direction, finding a few of the scientists.

He gets captured by the Sontaran (Lynx). With one of the scientists' help, he escapes and plows straight into a grumpy giant.

Plot-wise, nothing much happens. But it's entirely fun. From Boba Fett firing on people, to Sarah Jane all but slapping the "unknown" Doctor, to Lynx being surprised that the Doctor knows of the Rutans, every bit of this is fun.

The dialog is witty and snippy at the same time. After the trying day I've had, this was exactly what I needed.

Episode 3
Sarah Jane and Boba Fett rescue the Doctor, capturing him in the process. It doesn't take long for him to talk them out of it, changing their minds in the process. They wall work together to defeat their enemies.

There's a massive all-out (mostly second-unit) battle between the two sides. There are a couple shots of the Doctor carelessly dropping stink bombs over the side of the castle, and the way he does it is hilarious.

The Sontaran, Linx, decides to take off in his ship. The Doctor tries to strike a deal with him that will put everyone back in their proper time. The alien raises his gun and fires.

Have I mentioned how much I love this story yet? Because I do. Pertwee and Sladen (The Doctor and Sarah) work so well together, it's a joy to watch. The characters don't trust each other, but learn to work together, and it's just the beginning for them.

Pertwee is hilarious during the battle. It's just a few shots, but it reminds me of the few comedic moments he had in previous episodes. Generally, it's when he's playing dress-up, such as the milk maid, that his funny side comes out. It's all too brief, and I wish there had been more of it.

I met Jeremy Bulloch here in Omaha. Jeremy is most famously known as the man who played Boba Fett in Star Wars, but here he plays one of his two Doctor Who parts. He's warm, gracious, and friendly in person. At the signing, there were hundreds of people there with Star Wars memorabilia. I was the only one who brought anything Doctor Who (this dvd, in fact). Because of that, he was quite happy to chat for a long time about his time doing this story. Two days after that meeting, he went into the recording studio to do the audiobook, and he told me all about how much he was looking forward to revisiting this story.

Episode 4
Sarah Jane and one of the scientists rescue the Doctor. They knock Linx out, and the blowhole explanation is almost word for word what was used in the 10th Doctor two-parter. Very nice continuity there.

One at a time, the Doctor sends the scientists back to the 20th century. Just as Linx is shutting the door to his ship, prepping it to take off, Boba Fett uses his bounty hunter skills to fire an arrow directly into the Sontaran's blowhole, making him go boom. This causes the ship to go boom, which in turn causes the whole castle to go boom.

The Doctor and Sarah Jane bid farewell to Boba, step into the Tardis, and take off.

I get a big time Donna Noble feel here. It's not as stretched out, though. In both cases, the companions meet the Doctor under unusual circumstances, refuse to believe what they see, and start off believing him to be the bad guy that they have to defeat. They both come around and turn out to be the most loyal companions he's ever had. Neither is the helpless victim, they are both strong, and strong-willed, and will butt heads with the Doctor when he needs it.

Another thing I love about this is that we get to *see* Jeremy Bulloch. He's a fantastic actor, but in his most famous part, he's covered head to toe. Anybody could be in that suit, and the audience wouldn't even know. In the special editions of the movies, there IS somebody else in the suit in newly-shot scenes. But not here. No, here you see Jeremy the entire time, and he's a visual actor. I mean, he does act with his face, and he does a great job.

And with that said, there's Linx. The actor is also covered head to toe. And even when the helmet comes off, he's got the Mr. Potato-head makeup on, which means that the most you can see is his eyes. Now, we only got to see two Sontarans. Linx and one other. And that's kind of stuck through the rest of their appearances, they usually appear in pairs. They also usually get some sort of makeup redesign. Unfortunately, I seem to remember that each time they return, their makeup is worse. The design in The Two Doctors (Colin Baker's three-parter, Patrick Troughton's final Who story) is the worst of the lot. This is the best they ever look in the original series.

Man that's a long-winded way of saying it. Eh.

I don't know what it was about this story that kept my interest. Maybe it's the casting, maybe it's the writing. Whatever it was, every episode was interesting, the cliffhangers really were cliffhangers - I wanted to know right away what was going to happen - and waiting until the next day was a challenge.

But that's a part of this project. Unless there are outside circumstances that pop up, it's one per day. And so it continues.

With this, I bid farewell to the Pertwee/Third Doctor era. Starting Monday, we'll be getting into the Tom Baker/Fourth Doctor era. He is the most popular Doctor of the classic era, probably due to how long he played the part, eight years. That's more than double everyone except Pertwee, who made it to five years before leaving.