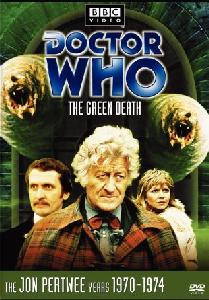 For some glossed over reason, the Doctor and Jo argue. She leaves him to go investigate something or other, and the Brig tags along. (wtf now?)

The Doctor goes off in the Tardis, landing in a cave, then promptly gets attacked by something with a tentacle.

Jo meets and flirts with a professor. The Doctor runs from the tentacle monster. The Brig talks shop with a bunch of businessmen.

Jo wanders off to explore the mine, where she gets trapped. Again.

This version of the Doctor sure likes being in caves and other underground locations. If I remember correctly, this is Jo's last story. If not, it's at least the last story she has out on dvd, because the next one is Sarah Jane's introduction. (excuse me while I thank every deity who has ever existed)

Basically, nobody is acting in character here. And that's odd, with Barry Letts as one of the writers. I am reminded of an episode of Xena where people fall under a spell causing them to become obsessed with the first thing they think. Xena becomes obsessed with fishing; Gabrielle with outer beauty; Joxer becomes an ape-man.

With the Doctor going off to investigate whatever random thing he does, and Jo becoming obsessed with finding a professor, and the Brig being obsessed with driving Jo around (yes, he becomes a chauffeur), it's comical. And I'm not sure that's a good thing just yet. We shall see.

Episode 2
Jo is at the bottom of the shaft with Bert. Professor Jones is still at his place, but goes off to rescue her.

The Brig tries to get equipment to help rescue Jo, but there seems to be nothing handy.

Lots of running around, padding up several minutes at a time, while looking for equipment.

Bert gets some green gunk on his hand so he decides to let Jo run on ahead. She does. Sadly, the Doctor finds her.

As they're standing there, giant maggots crawl out of the cave walls.

I'm of mixed feelings here. Not counting the first two Doctors (due to their episodes being trashed), this is the Doctor of whom I've see the least. And after this, there's only one story to go. There's a part of me that is genuinely enjoying Pertwee's performance as the title character. At the same time, in both this and the last episode, he comes across as being bored. Is he bored of the show, or what? I don't know. There's another part of me that is eager to get past him and to the Fourth Doctor.

Ah well. Eight episodes to go and then we're on to Baker the First.

Episode 3
The maggots crawl around in the green gunk. The Doctor and Jo casually walk away.

The Brig argues with the director of Global, a chap named Stevens. Each tries to one-up the other. I'm kind of surprised neither grabbed a measuring stick, cuz it's that kind of conversation.

One of the workers goes to the director, complaining of headaches. Stevens puts a device on the man that is eerily similar to a Cyberman head (possibly just a set of headphones, but ...) and it takes over the guy's mind. He jumps out a window, committing suicide. And they show the body on the ground!

Everyone reunites and goes for dinner. There, they discuss an egg Jo and the Doctor found. Jo flirts heavily with Jones. Which is odd, since she both sounds and acts like a toddler.

The egg hatches and a maggot starts crawling towards Jo.

The big thing here, at least the major thing that jumped out, is the suicide. At its heart, Doctor Who IS a childrens' show. It was shown when kids would be watching, hiding behind the couch cuz of the scary monsters. It's one thing to talk about something happening off-screen, but to actually show it on screen, and then to show the guy's corpse is really shocking.

Episode 4
The maggot attacks random dude (Chancey?) who now has green gunk on him and then it disappears.

The Brig blows up the mine. The Doctor wanted to study the maggots and gets pissed off at the Brig and Director Stevens.

It didn't work. Maggots are everywhere, attacking people. Three people are dead already. Both the Brig and the Doctor quote Lilo from Lilo and Stitch - "They're all over the place!"

The Doctor finds himself "alone" in a room with a talking computer named Boss.

Is this even connected with the first two episodes? Cuz it's SO much better, it's like they are written by different people entirely. And the comedy? Yeah, it's gold.

Episode 5
The Doctor and the computer argue, bickering back and forth. Maggots hiss at Jo then Jones rescues her. By telling her to walk.

Lots of explosions follow. Where did they find the money? Jones gets hit, so Jo looks after him.

Mike helps The Doctor to escape the computer's hold. In the process, a gate is destroyed as is a set of miniblinds.

Benton and the Doctor take off in Bessie, driving off to rescue the professor and Jo. They bring the pair back, delivering Jones to the hospital or sickbay or whatever. He's got green gunk on his neck.

Mike is cornered by men under Boss's control.

Some of the best fx work in the series to date, combined with some of the worst fx at the same time, make this at least interesting to watch, even if the script is pretty poorly-written.

Episode 6
While the Doctor uses Science! to try to find a cure for Jones, Benton brings in a maggot shell. They are changing. But into what?

The Doctor finds something that might kill the maggots, and off they go to deliver it to as many of them as possible. As they do, they pass by the thing the maggots are/were changing into - a ginormous fly the size of Godzilla. The Doctor kills it with his jacket.

The cure works and Jones is going to survive. With Stevens' help, the Doctor makes the computer go boom.

Jo and Jones decide to get married and she leaves the Doctor forever.

At least the Doctor used Science! to save the day here.