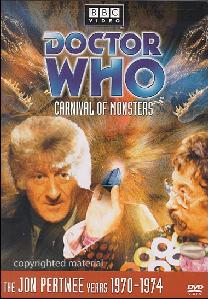 An alien world. Like Santa's workshop, a load of packages runs through a conveyor belt.

Elsewhere, the Tardis materializes on a boat out to sea. Jo whines, then has the audacity to shhh the Doctor. They go outside. The wooden boat we saw just a moment ago has magically transformed into a metal ship. They see a few people who seem to be from the 1920s. And then a dinosaur attacks.

The Doctor and Jo return to the room with the Tardis. And that's when a giant hand reaches down and steals the Tardis away.

I have no idea what is going on here. I'm just gonna grab a bowl of popcorn and hang on for the ride.

Episode 2
Vol shows the mini-Tardis to his assistant, calling it bric-a-brac, and then hides it.

He flips a few switches and the people inside start behaving violently, including the Doctor, who starts boxing.

The Doctor and Jo escape the ship by going down a shaft, then exploring. And there is a Cyberman trapped inside, though the Doctor hasn't found him - yet.

When it's taken outside of the machine, the Tardis grows to full size. That means anything taken out would also return to normal.

The Doctor and Jo enter another environment, something called Circuit 5. It is populated by the same dinosaurs we saw earlier. And they are hungry!

It's not looking good for the Doctor. He could be eaten. Will he survive? We'll find out tomorrow. Er, Monday.

It's really not a half-bad episode. I'm enjoying it.

Episode 3
The Doctor and Jo run. They're trying to return to the previous circuit. There are three of these dinos. Two of them are making out, leaving the third one to be the hungry guy. Vol sticks his hand in and pets some of them, giving the humanoids time to escape.

The Doctor and Jo make it back to the boat, looking for climbing rope. The dinos follow them.

With Jo and the others trapped inside, the Doctor exits the machine, looking like he's about to pass out.

Yay! He finally left Jo behind. There is an awful lot of padding here. Everything that's happened so far could have been done in about 10 minutes.

Episode 4
The Doctor quickly grows to full size and goes on a rampage. Vol and his assistant laugh as the Doctor interrogates everyone around him.

As Jo wonders around uselessly, the Doctor discovers that Vol won his machine by gambling. As per usual, Jo gets captured then escapes somehow.

The Doctor goes back inside the machine to rescue Jo. They find each other and quickly make it back outside. With the Doctor's help, everyone in the machine returns to their proper place and time.

While Vol pulls another one on the aliens, the Doctor and Jo leave in the Tardis.

There really wasn't any point to this story. It was all fluff, all fun. If you can leave your brain at the door (and haven't we all learned to do that at one time or another?) it is silly entertainment.