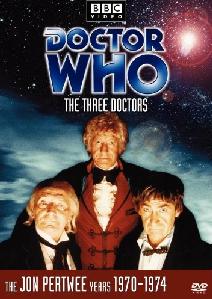 A man named Hollis studies a downed weather balloon and then disappears, causing birds to go nuts. Dr. Tyler is investigating the balloon for UNIT and is on his way to meet the man, but cannot find him.

Tyler reports in at UNIT HQ. The second he's left alone, lightning flashes and he disappears as well.

The Doctor and Jo pull into HQ in Bessie. The lightning flashes again just after they get out and Bessie disappears.

Outside, monsters appear, springing out all over the place. Soldiers fire at them, doing no good.

Inside, the lighting blob comes after the Doctor. He, Jo, and Benton rush inside the Tardis. There, he calls the Time Lords for help.

They are under siege and cannot directly help the Doctor. But what they can do is send help in the form of his earlier selves. That's when Two shows up in the Tardis.

The Brig and a soldier appear outside the Tardis lab and fire at the lightning blob.

One appears on the screen and chews Three and Two out for fighting.

Three turns off the shields and steps outside the Tardis. He tells Miss Useless to stay inside. She follows him anyway, just in time for the blob to get them both.

1 - The first three Doctors together at last. The story is really secondary. The big thing is the teaming up of these three Doctors. It's huge!

2 - I love Benton's line: "You men, follow me around back." With the actor's reputation, that's hilarious. It's also funny how he's grooving on seeing Two.

3 - The Time Lords are very specific. They refer to One as the very first, original Doctor. That should put to rest that stupid theory from Terrance Dicks about Doctors before Hartnell.

Episode 2
Two and Benton go out to investigate. They meet the Brig, who flips out at Two's "new" appearance.

Three and Jo explore the other world, finding the things that had disappeared from Earth, including Bessie and Dr. Tyler.

As Two, the Brig, and Benton natter about, Three, Jo, and Tyler find Omega's palace.

On advice from One, the Second Doctor lowers the shields. The lighting blob attacks, and all of UNIT HQ vanishes.

The Brig is hilarious here. His reaction to the various Doctors works so well. It reminds me of the later special The Five Doctors, and his goodbye to the group.

There is so much padding here, and most of it seems designed to keep the two Doctors apart. But that's ok, there's plenty more to come.

Episode 3
Three comes face to ... well, mask .. with Omega. His creatures take Tyler and Jo away, keeping Three behind to hear his insane ranting.

Omega was the solar engineer, the Time Lord who gave Gallifrey the power to achieve time travel.

The Brig, Benton, and Two leave the Tardis. Two looks back and sees one of the creatures. That's when he says his now famous line "Oh my giddy aunt!"

The Brig wanders off. Two and Benton enter Omega's hall. It does not go well.

Later, Three explains to Two that they live in a world entirely created by Omega's will.

The Doctors go off in one direction while the humans go in another, eventually escaping Omega's place. All the humans meet up outside and keep running away.

Inside, Three and Omega are locked in combat.

In a desperate move, the Gallifreyan Time Lords try to push One in with the others, using the very last of their power.

Yeah, ok, there's a story. But I don't care. I'm loving having these three guys together. Everything about it is bigger and better than a normal story, and we are getting some major info on the history of the Time Lords.

It's not all about Rassilon. Omega played a monumental role in their history, and did not die as they had supposed.

I know they brought him back in a Fifth Doctor story, and I'm looking forward to seeing the character again (in an episode with Colin Baker, no less!). After bringing Rassilon back for modern Who, might they consider bringing Omega back too?

Episode 4
It was an illusion. Two helps pick Three up off the floor.

The humans drive off in Bessie, returning to the UNIT HQ. Two shuffles them all inside the Tardis.

Jo is a useless, annoying brat.

The trickery works and everyone returns to their proper place. The Time Lords give Three back his freedom, returning his knowledge of time travel and give him a new materialization device.

Who was Katy Manning fucking? That's the only reason I can think of, why Jo has stuck around for this long. I loathe her character. She is like a prototype of Rose - a spoiled rotten self-centered childish bitch with no regard for anyone but herself. With Mel's voice. Actually, that's it. She is like a combination of Mel and Rose.

This is a bittersweet ending. It is the final time William Hartnell played the Doctor. We see clips of him later, but for new material, this is it. It is also a reminder that all three of the actors who played the Doctor here have since passed on. At the same time, it is a renewal of the series with a big change. The Doctor is now free to travel in his Tardis after a long time stuck on Earth-set stories.