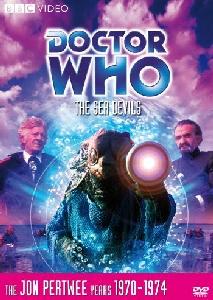 A boat is being attacked. They call for help, but before they can say where they are, it's too late.

Elsewhere, the Doctor and Jo travel by boat to a prison, which is (in theory) the Master's permanent home.

They speak with the warden, who mentions quite a few boats of sunk recently, and they are lucky to have made it there. Yes, the Master is still a prisoner. Oh, and all the guards are immune to hypnosis.

The Doctor and Jo talk with the Master. He is pleasant, civil, even friendly. After the Doctor leaves, it turns out to be faked. Everyone at the prison is under the Master's control.

The Doctor goes off to investigate the missing boats. He discovers an abandoned fort in the middle of the sinkings. As soon as they're in the fort, they look out - their boat has been destroyed. They're trapped. And a monster is coming right at them!

This is different, yet sort of the same. The Sea Devil has been hid pretty well. I'm guessing the next episode will have a big reveal of the costume/makeup.

I wonder how they caught the Master? I suppose it doesn't matter much, it's an unseen (by me) adventure. Anyway, he's all about hypnotizing people. Some things never change.

Since when does the useless Jo refer to herself as Josephine? That's new. But she's still useless.

Episode 2
Hmm. Ok, the monster is now just a guy, and he's a raving loony. The Doctor goes to create a microphone to call for help, and meets one of the Sea Devils. He runs back to the room with Jo and the man - who is now sleeping.

The Doctor manages to get a message out and they are quickly rescued by a regenerating helicopter.

The Master escapes his prison (well, he walks right out the front door), pretending to be a Naval officer.

The Doctor and Jo see the Master off the island. They go back to the prison island to be certain. He's there and the two Time Lords engage in a bit of (literal) fencing. And why not? It's manly.

This Master fellow sure is a tricky/sneaky little fellow.

So far, the writing's good, and I didn't want to impale Jo once during the episode. For that character, that's a huge thing!

The Doctor is taken prisoner as Jo wanders around aimlessly outside. She finds him and helps him escape.

Together, they make it to the beach before being surrounded by humans under the Master's hypnotic control .. just in time for the Sea Devils to rise out of the water.

So much padding, so little content. I mean, really? That's all they could come up with? It's like the director on this episode told the actress "Just walk around and be as uninteresting as you can be," then put every second of that footage into the episode.

Episode 4
While the others are distracted by the Sea Devils, the Doctor and Jo make their escape - through a minefield. And I finally have seen where that image of the Third Doctor and his sonic screwdriver is from - this scene.

The Doctor tries to warn everyone he sees about the "monsters" but people just laugh in his face.

Until they attack the prison, killing people with advanced guns. Then the Navy assists him.

With their help, he travels to the bottom of the sea in a capsule attached to one of their boats. On the bottom, he looks out to find a pair of eyes staring back at him. The boat's captain orders the capsule brought back immediately. And it is, but with no sign of the Doctor inside.

They HAD to have had assistance from the UK Navy. there's no way they could have afforded this otherwise, and it did look great.

Except, this episode is little more than a passable rewrite of The Silurians ... And again, no one is believing the Doctor. Come on, is that really the best they can do?

The Doctor and the Sea Devils talk. Argue, more like it. The Doctor seems to confuse them with the Silurians, even referring to events from that story as though the Sea Devils were there. The lead SD says there are thousands of his people in hibernation at this base, and they have many bases all over the planet.

The Doctor offers to negotiate peace between them and the humans. Too bad the Master enters at just that moment.

The Doctor returns to the surface to speak with Jo and the gang. Elsewhere, a group of SDs emerge from the water and begin attacking on land.

Seriously? It's little more than a rewrite of the Silurians, just adding the Master, and not including clips from that previous story.

Episode 6
The SD, with the Master's help, round up all the people they can find, holding them as hostages.

The Doctor creates a noisy device that impacts the SDs - they're all helpless. The humans take this opportunity to go around saying Bang Bang!

I cannot describe just how bored I was during this episode. It was one minute of content and 23 minutes of filler.

Just like a previous episode of this story, well over half of this episode was just following people wandering around aimlessly. This whole story seems like a four episode rewrite of The Silurians, expanded to six episodes with no additional content. The writing is awful, saved only by the actors trying desperately not to fail. This will not be a story I'd revisit in the future.

Because I'll be on a trip next week, that's it for awhile. I'll be back a week from Monday with the first episode of The Three Doctors.