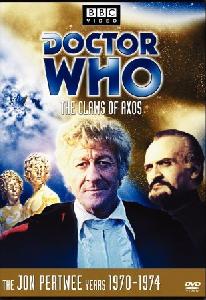 Something big is headed towards Earth. Some people it may be a comet, but we can see it's another alien ship. Inside it are the Axons.

At UNIT HQ, a man named Chinn is being a pain in the patookey. He's a member of Parliament, and is doing his level best to throw his considerable weight around, while the Doctor and the others simply roll their eyes. To prove his worth, Chinn orders missiles to attack the incoming craft. Naturally, they don't do a dang thing.

The ship crash lands. A team from UNIT goes to investigate. They go inside the ship, exploring. They meet a group of Axons who seem to be peaceful and completely harmless. Why, then, is the Master being held prisoner down below? And what is the creature Jo stumbles upon in that same room?

So far, it's brilliant. And roles are reversed when they meet the alien Axons. It's the Doctor who is suspicious, while its Chinn who wants to be all buddy buddy with the aliens.

The set design work looks fantastic, while the new actors are all great in their respective roles. Sure, you've got the Doc and the Brig and Benton, but the Axons and the giant douchebag Chinn are all *believable* with a wonderful script. There's mystery, and suspense, and a bit of a child's wonder, all mixed in together.

I don't know about the rest of the story yet, but this episode? I love it.

Episode 2
Jo screams. The Doctor runs to find her. The Axon gives them all a line of BS and everyone is happy about it. Chinn reports to the Minister, who gives him all the powers he could want.

Chinn immediately has all the UNIT folks arrested, including the Big. Jo is useless. Interesting - the Master has been working with the Axons the whole time. For some reason, they have his Tardis. He is allowed to leave the ship to go on an errand for them.

An Axon clone of the Doctor's CIA friend Mike tries to attack him, but the real Mike and the Doctor defeat the clone.

Though under guard, the Doctor manages to test some of the Axonite material. Doing so causes intense pain for the Axons on the ship. The Doctor realizes the ship, the people, they're all Axonite. And his experiments will cause the Axonite to grow, maybe taking over the whole planet.

Ok, now I'm intrigued. The Master hasn't appeared in any stories before this (that were on dvd, that is), so I'm wondering why the Axons have his Tardis. Jo already knows him, so there's definitely been at least one story prior to this with the character.

I'm curious what these Axons are all about. They have some sort of evil plan, and they need the Master to help them with whatever it is. But the people are made of the same stuff as the ship. So the ship must be alive, like a proto-Vorlon ship maybe?

And that brings us to Jo. I can't stand her. She must somehow be in UNIT, or she wouldn't be there. Where Liz was a professional, a scientist, someone the Doctor could have an actual conversation with, Jo is pretty much the opposite. When the Brig gives her an order (and, as UNIT, she should be following any orders he gives), she completely ignores him. When told to be quiet, she won't shut her fucking mouth. She talks in this "baby voice" like she's trying to be cute, and walks around in the snow in a miniskirt.

Episode 3
In the lab, the Axonite comes to life and starts attacking people, then kidnaps the Doctor and Jo. The Axonites tell the Doctor their whole plan.

Due to his massive fuck up, Chinn is forced to resign. He simply forgets to tell anybody around him.

The Axons interrogate the Doctor, trying to get the secret of time travel - the secret he doesn't even remember, thanks to the blocks placed in his memories by the Time Lords.

The Master repeatedly tries to get the Doctor's Tardis fixed, without success.

The Doctor works with the Axons. While their experiment is failing, he escapes. The Master works with UNIT. In the end, he flips a switch that will destroy the Axon ship - with Jo and the Doctor trapped inside.

Interesting, the Master working with UNIT. It almost looks like the Brig and the Master have a sort of respect for each other, though they are on opposite sides of everything.

Jo is still a useless creaming banshee. Can she die now, please?

The video for the first half of this episode is just terrible. It's really shitty quality. I know it was one of the earliest releases, but it looks like they didn't even make a bit of effort cleaning it up. The newer releases (as well as the previous two episodes) look SO much better. When these things cost 20 bucks - or more - for a single story, I expect better.

Episode 4
Jo stands around screaming. The Doctor slaps her and tells her to stop it. I rewound that scene about 15 times.

The Doctor and Jo escape and rejoin their UNIT colleagues. (um, wasn't the ship supposed to go boom? or are we just supposed to forget the last episode happened?)

The Doctor and the Master go inside the Doc's Tardis. The Doctor offers to let the Master travel with him, and they do work together for a little while.

The Doctor tells the Brig off, steps back inside his Tardis and tells the Master to start er up. It dematerializes and reappears in the Axos' ship. He fakes a deal with them that will end up destroying them.

The Master escapes, everyone leaves, the ship and complex go boom, and the Tardis materializes next to the Brig, far away from the explosion.

The video quality is back to the normal high standards, so that's good. The continuity, however, leaves something to be desired. What, we're just supposed to forget that the cliffhanger has the Axos ship go boom, without a single line of dialog suggesting they stopped it?

What the fuck kind of power does Jo have over the Doctor? In the last episode, the Doctor agrees to work with the Axons only after they show him a picture of what Jo would look like if she was old. Here, he specifically says that when he goes away, Jo is the only one he will miss. In an unscientific poll, I've ranked her the most useless companion in the history of ever. What is it the Doctor sees in her, I just don't get it? It's certainly not that she is "pretty" since let's face it, he's had better looking girls around. And Jamie. It's not that she's smart, because she's dumb as a fucking box of rocks. I know there are people who complain about Adric and Rose, but have they seen an episode with Jo?

All that said, I DID like the story. The idea of a living ship (years before Babylon 5 or Farscape tried it) is fascinating, and then to throw in that everything aboard the ship, including the "people" are all just part of the one being? That's a really cool concept, and I think they pulled it off splendidly.