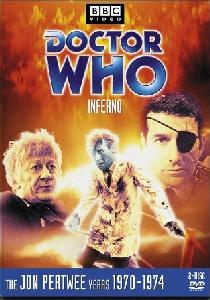 The Doctor takes a leisurely drive while singing opera.

In a factory, men argue. One of them puts his hand against a machine and it turns green.

The Brig has a temporary HQ set up near the factory - which is housing a giant drill. The drill is going to be the first to penetrate the Earth's crust. They have already gone 20 miles, now they're going deeper.

The Doctor is working with them as a scientific adviser. He has his own experiments running alongside the main project. Liz doesn't approve. It's clear the Doctor's experiments are an attempt to get the Tardis running again.

Elsewhere, a zombie with green skin starts killing workers and messing with controls.

In the lab, the Tardis console is out on the floor. Things start to overload, and everything goes wonky. The control and the Doctor dematerialize as Liz watches in horror. Moments later, he returns.

Together, they go back to the drill room and meet up with the Brig. There's been another murder. And in another room - the zombie is back!

OK, that's different. The Doctor went somewhere for a little while and the cover on the DVD shows the Brig with an eye-patch. I'm guessing parallel universe.

It seems obvious some time has passed between Spearhead and this, based on the relationship between the Brig and the Doc. There is no longer a leash, for example. They work together as friends, not as adversaries, and that's a good thing.

Not sure yet about the zombies. It could be funny or deeply stupid. And they may be something else, but for now, I'm calling them zombies.

Episode 2
The Doctor rushes in and meets the zombie. The zombie falls against a wall and passes out, then falls to the ground. Where it had been against the wall, the wall is scorched. The Doctor orders everyone to avoid touching the zombie.

Outside, the Doctor meets a UNIT soldier who had been turned into a zombie. And there are other zombies watching.

The Doctor and the professor have an all-out fight, which the Brig stops. The Doctor leaves in a huff, going back to his lab. He sends Liz off on a wild goose chase. She figures it out and returns with the Brig just as the Doctor dematerializes with the Tardis console and Bessie.

If Liz has her own sonic screwdriver, which she uses to open the door at the end of the episode, why did she need the Doctor to open it at the start of the non-errand? They didn't see each other in the meantime, so it's a little plothole.

Favorite line of this episode - "You, sir, are a nitwit." The Doctor says this to the professor at the drill. His delivery is hilarious, and it had me cracking up.

Episode 3
The Doctor materializes in a room that looks just like his lab, only .. different. He tries to open the doors (which are blue with the little window pains on the top, making it look like the front of the Tardis, I just noticed that), but no go. He ends up forcing the doors open.

As soon as he gets outside, soldiers shoot at him, so he jumps in Bessie and drives off, running over a few men in the process. It's a good thing they are such horrible shots, as they miss every single time.

He encounters another zombie, but Benton shoots it, thinking it's the strange white-haired man.

Still hiding, the Doctor sees - and calls out to - Liz, who has a radically different appearance. He is taken to the alt-Brig, who has a large scar and an eye patch.

The Doctor keeps trying to warn them that they are in danger, but this alt-Brig refuses to listen to anything anybody has to say.

When the Brig is called away, the Doctor escapes, running straight for the drill room. He tries to repair the computer - which may cause the whole complex to go boom if not fixed - when Benton cocks his gun and orders him outside.

There have been other parallel universes in this series. One I remember with loathing is the story where they introduce Turlough. That one was just awful. In the modern series, there's another one with an alt-Earth they've labeled Pete's World. If there are two, who is to say there aren't many more parallel universes out there? And if that's the case, with all the other alternate beings (alt-Brig, alt-Pete, alt-whoever), why do we only ever see the one Doctor?

I think it might be interesting to have one of these parallel universe stories where the Doctor meets his own duplicate - but a different version. Say, Ten meeting an alternate Fourth Doctor, one who is grumpy and crotchety like the First Doctor? And when I say alternate, I mean completely different actor. Because who knows what adventures might have happened to the character in another universe?

Just something I was thinking of while watching the brunette Liz.

Episode 4
Liz stops Benton from shooting The Doctor and allows the stranger to fix the computer.

Liz and the Brig interrogate the Doctor. He is taken to a cell and interrogated again, this time just by Liz, while Benton points a gun at him and mocks him. The Doctor doesn't take kindly to Liz, finally giving up in frustration, saying "Your counterpart had some intelligence. I wish I could say the same for you." She leaves and he goes back to the bunk and lays down.

The Doctor calls the guard back in. The man in the cell next to him is a zombie. It kills the guard then comes after the Doctor. He confuses it, giving him time to escape.

The Doctor sneaks his way back to the control room, where he is immediately captured.

Capture, escape, capture, escape. Same song, different day. This episode is an example of "fluff" ... Nothing remarkable happens, and it ends in the same place it begins - the Doctor is in the control room getting captured.

Episode 5
The countdown completes and the drill goes even deeper. This is followed by half an episode of people walking around.

Then there's arguing between the Brig and others. The scenery is chewed thoroughly.

The Doctor tries again to convince the not-Brig and others about the Prime universe. Eventually, he is able to talk them into going to the lab where his console materialized.

To provide them with proof, he uses the console to disappear a few seconds into the future.

At the drillhead, the director and several of his staff have been turned into zombies. They grab Benton and turn him into one.

They sit around and argue some more until a zombie starts breaking through the door.

Ugh. The last episode was shit. So is this. Argue, argue, argue. This, an episode does not make.

It needs to get a LOT better. The first three episodes were pretty awesome. These last two are just shitty fluff with nothing going on.

Episode 6
The Doctor scares it off with a fire extinguisher.

Then there's about 20 minutes of bitching and bickering back and forth amongst the humans and Time Lord.

Alt-Liz has enough of alt-Brig's BS and shoots him. Seconds later, the drill has gone too far and lava starts appearing everywhere, coming straight for them.

OK, I get it. They wanted something unusual. Did that mean they'd all sit around bitching at each other for episode after episode?

This shit is getting old. Let's get back to the Prime universe.

Episode 7
The Doctor returns to the Prime Earth. He's passed out and Liz finds him.

Though he's in a coma, he talks in his "sleep" and tells Liz how to fix the drill. She understands and goes straight to the drill control room.

It doesn't work exactly. The Doctor wakes up and tries to shut the drill down. He's acting like a raving looney and they escort him out.

They finally get the drill shut down and the project is officially disbanded.

Bicker, bitch, argue, rinse and repeat. In sorry, this isn't Doctor Who. This is Dynasty or Melrose Place or something. Three episodes in a row where the only thing that happens is characters bitching at each other and fighting like spoiled children? That's just three episodes too long.