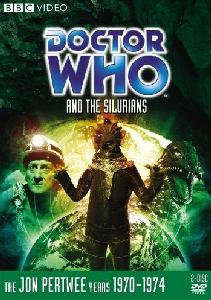 Workers in a cave start hearing noises, dinosaur-like, and go off to investigate.

The Doctor has received his car, Bessie, and he's working underneath, getting her in tip-top shape. Liz comes in to deliver a message from the Brig. The two of them are being summoned, so off they go to meet up with their boss in an underground testing facility.

There are ... issues ... going on. Power losses, personnel disappearing, etc., and UNIT has been called in to investigate.

They go about their separate ways. The Doctor finds something, but the Brig ignores his report.

The Doctor goes into the tunnels to investigate. And there he finds a living dinosaur. Which comes straight for him!

I really have no fricken idea what the hell is going on in this story. So far, I'm not impressed. I hope it gets better - as in, a plot that I can see. At this point, it's just a series of random scenes. Maybe it's setting stuff up. I hope so, cuz this sucker is seven episodes long.

Episode 2
A warning sound is heard and the dinosaur runs away. The Doctor also runs away and tells the Brig and Liz what he saw.

The Brig leads a party down below. They find nothing. The Doctor says he believes there are two types of monsters down there. One is possibly controlling the other, like when the dinosaur was called off.

One of the workers is working the the ... well, whatever kind of monster/alien it is (I'm assuming Silurian, but that isn't confirmed yet).

The asthmatic dino goes to sleep in a barn, then kills a guy. The Doctor and his team go to investigate. The farmer dude is dead. His wife identifies a drawing the Doctor makes. It's not a dino - it's a Silurian. So they are all asthmatics.

While the Doctor and the Brig question the widow, the Silurian attacks Liz.

Much better. Well, considering how bad the previous one was, anyway. Things seem to be happening. They do keep hiding the Silurian. I'm not sure yet. Either there is a big huge honking reveal coming up, or they think the costume is crap and they're trying their best to hide it. Both are equally possible.

Episode 3
The attack didn't last long - Liz screams and it scrambles out of the barn.

Dr. Quinn is talking with Miss Dawson about a communications device. The whole time, he has this booger the size of a small planet dangling from his nose.

Quinn acts suspiciously, and the Doctor watches him, possibly looking for that booger.

The Doctor and Liz go to Quinn's office and start poking around. They find a small globe which shows the Earth as it was before the great continental drift millions of years ago.

Quinn has the Silurian locked up in his home. It will die if it's not returned to the caves. Quinn is holding it hostage, waiting for it to give up massive scientific knowledge.

The Doctor goes back to Quinn's home - Quinn is dead. The Doctor finds the comm device and turns it on. Seconds later, the Silurian enters.

Ok, this one didn't completely suck, unlike the previous two episodes. We do finally get to see the Silurian. It was ok. Not great, not sucky, just ok.

I've seen some stuff later on with Jo Grant as the companion. The difference between someone competent like Liz and an annoying little follower like Jo, is striking. I am starting to like having Liz around. She is in that Donna vein - a strong female character who is all but the Doctor's equal. I can't help but wonder if they patterned Romana after Liz?

Beyond that, the only thing I can think of that stands out here is the giant planet hanging from Quinn's nose. And that's kind of gross, so I'll refrain from commenting.

Episode 4
The Silurian approaches. The Doctor changes his attitude completely, going almost deferential. He asks if there is anything he can do to help their people, if they are in trouble, how many are there, etc.?

The Silurian brushes past him, running outside. The Doctor warns it that without his help, the humans will destroy them.

The Doctor and Liz use a map he'd found at Quinn's place to navigate the caves. He uses the comm device to open a locked door. It's almost like a new sort of sonic screwdriver.

While exploring, they find the dino that had attacked the Doctor earlier. They also witness the Silurians waking another from hibernation. The Doctor says that explains the power losses.

O. M. Glee! Geoffrey Palmer shows up at the complex. He's playing Masters, the "permanent undersecretary" (whatever that is).

The Doctor tells the Brig and Masters what he suspects and knows. Miss Dawson then enters and confirms everything. Quinn was working with the Silurians - that's something the Brig notices, she wasn't there when the Doctor named them, so it's big time confirmation. The Brig orders men down into the caves to destroy the "aliens."

The Doctor goes down first to warn them. Naturally, the Silurians don't listen, and lock him up in a cage.

So much better than the first two episodes, it's like this is the treat they give you for making it through that torture.

Palmers - Yay! I know him mostly from the series "As Time Goes By," where he co-stars with The Judi Dench. He's had three parts so far in Doctor Who, including the captain of the Titanic in the modern series.

wtf is a "permanent undersecretary"?

Episode 5
The UNIT team is trapped in the caves. From his cage, The Doctor keeps trying to reason with the Silurians, though his fellow prisoner tells him to keep quiet.

Two of the Silurians discuss the situation. They remember the humans as apes, and don't believe they are any better now than millions of years ago.

The Doctor bargains with the Silurian leader, saying they could all live together in peace. The Silurians prefer to live in extreme heat, the sort of places humans consider unlivable.

He agrees, and lets the UNIT team go free.

Major Baker - the Doctor's fellow captive - is also set free. Only, other Silurians have injected him with something that could kill millions of humans. It is apparently spread by touch. The Doctor returns just in time to warn the others.

Baker is taken to the hospital. The Doctor freaks out - it's the worst thing they could have done. Along the way, he infects others, who infect others, and on and on, as the Doctor and the Brig see for themselves when they rush to find him.

It's refreshing to encounter an alien race which isn't completely full of interchangeable drones. What I mean is the Silurians are individuals, and they act like it. They don't all share the same opinions or motivations. They don't act as one, and it's about time.

I'm starting to like the Silurians as a people. They were here first, and when they knew our predecessors, well, they WERE apes. For them, no time has passed, and the reason they went into hibernation in the first place turned out to be in error.

The apes have taken over their planet and forgot they ever existed. How terrible that would be - go to sleep, wake up, and find the entire planet rearranged.

And though I am liking the Sils, I am starting to hate that comm device sound, which they also use to control people from that third eye of theirs. It's getting on my last nerve, and every episode seems to have more and more of that sound effect.

Episode 6
Liz and the Doctor develop a vaccine against the virus. They vaccinate all the UNIT people, but are not able to find Masters.

He has taken a train away, and is in physical contact with hundreds of people along his way.

The Leader is killed. The Silurian who infected Baker takes his place. They go on the attack.

People start dropping like flies all over London, and it's quickly spreading outward.

The Doctor says "I'm beginning to lose confidence for the first time in my life. And that covers several thousand years." Interesting, that.

Liz, even with the vaccine, begins to feel the effects of the disease.

Masters is found, dead. Then the Doctor begins coming down with it.

The first victim is reported abroad - in Paris.

The Silurians leave the caves, marching to attack. Their first target? The Doctor.

Sad to see Geoffrey Palmer's character killed off. He was kind of a jerk, but may have calmed down and been an interesting recurring guy, in the same way the Brig now is.

There are many throwaway lines in Doctor Who. Some catch on and become part of the mythology of the show. Others are glossed over and forgotten. One of the former lines takes place during the Fourth Doctor's era. It is hastily revealed that there is a limit on the number of times a Time Lord can regenerate. They can have 12 regenerations, meaning a total of 13 lives. It was something that was a quickly-mentioned one-off thing, it didn't really mean a heck of a lot at the time. Now, some 30 years later, people are still flipping out over the line. Oh no, we're coming upon the 11th Doctor, we can only have two more, waaah waaaah.

Then, there's the latter kind, one of which was used here. The Doctor specifically tells Liz he has already lived for thousands of years. This was quickly glossed over. Again with the Fourth Doctor, he has a much lower figure, nine hundred and something I think it was.

All this means is that in a show about time travel, when history (or the future-history) is changed in almost every episode, it's pretty amazing that it's as consistent as it is.

Episode 7
The Sils carry the Doctor out of the base. It's quickly discovered by the others. The Brig orders every soldier into the caves and all the civilians are to be evacuated immediately.

The Doctor makes a deal off-screen with the new Leader. They return to the power planet. Liz assists him in betraying the Sils. Together, they rig the nuclear reactor to overload, meaning the place will go boom, and leave a major radiation leak for centuries. The Silurians return to their caves to hibernate for awhile longer.

It's all a bluff on the Doctor's part. He quickly reverses the polarity and there's no boom today.

The Doctor and Liz leave the planet. When they are a safe distance away, the Brig launches an attack on the base, destroying the Silurians. The Doctor is furious.

Yeah, I know. They're sooooo destroyed, totally. So I'm sure we'll be seeing them again. It's like the Daleks or Yeti or whatever random alien creatures. They're all destroyed, every last one. Except, some have found a way to survive. Or we didn't know about some on another planet, or whatever.

I have heard people mocking Pertwee's pronunciation of "Silurians" before, where he says it like "slur-ee-uhns" but it's weird. I kept listening for it, but everyone says it exactly the same, whether it's a random person with one bit of dialog or the Doc himself, they all say it the same way. Maybe it's in another story, dunno.

I was right, the comm signal sound effect is annoying to the extreme, and I hope I never hear it again. Seriously, when I have to reach for the mute button every time they're on screen, the producers are doing something wrong. Hopefully it's fixed for the Silurians' next appearance.