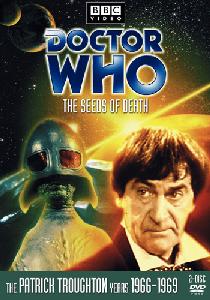 We open on a moon base, listening to a voiceover giving super fast directions. It sounds very much like a Cyberman, but not quite.

On a second base, something alien steps out of a transporter chamber and attacks the crew.

Finally, nearly 9 minutes in, we get our first glimpse of the regulars. The Doctor, Jamie, and Zoe are on the Tardis, at the controls. They are watching the viewer, and they see different rockets and things that don't fit in each others' time periods. The Doctor decides they must have landed at a space museum, and they go off to investigate.

They soon encounter the museum's owner, who gets excited by The Doctor's interest in his collection. I get the feeling he would be excited by anyone's interest, but he's been ridiculed enough for one lifetime.

The crew of the first base come to visit the owner. They beg him to use a rocket to take them to the second base, as they've lost control and their transporters aren't working.

Back on the second base, we finally see the alien ... and whatever it is, it seriously needs to visit a dermatologist! I know, the dvd says they are Ice Warriors, and it's their second appearance. Since I never saw the first one, that doesn't mean anything to me.

The story so far does not feel like Doctor Who. It feels like I'm watching a foreign science fiction film from the 1950s, the kind that is dubbed over, but we can still see the lips moving with the original language.

Please don't get me wrong - That's not a bad thing. The format of this series offers the ability to drop in like this, it's just not used very often.

At this point, I don't really have any idea what's going on here. There are two groups of workers on space-bases, plus the Tardis crew and the museum owner. I don't yet know enough about the new people to have opinions so far; I'm pretty much just waiting for something to happen.

Fortunately, it's not a bad episode ... I think Mind Robber has that area covered fairly well.

The alien dude kills one of the workers, threatening the others that if they don't do what he says, he'll kill them too.

In the museum, they discuss - at length - whether or not to use a rocket to visit the base, and then who should go. Days later, they decide The Doctor, Jamie, and Zoe should go, leaving the Tardis behind. Eventually, they take off, leaving the others behind.

On the base, the homing signal is cut off. The rocket no longer has a homing beacon to lock onto, and will either crash or drift away in the vastness of space.

Stretch. Stretch. Stretch some more. There are only three sets used here. The base, the one room that comprises the entirety of the museum, and the cramped rocket. They spend so much time debating about who would go that, for a few minutes, I thought I was watching C-Span. Everything that happened in this episode could have been done in the span of less than 30 seconds. Really. "Oh, he's dead. You better do what I say." cut. "Who wants to go? You three? ok, off you go." ... "Uh oh, ET can't phone home now." end credits.

Again, not BAD, it's just that ... well ... it's this eeeency little bit of plot with a whole lot of filler.

The Doctor reaches someone on the base, who tells him they've been taken over by aliens. By his description, the Doctor and Jamie recognize them as Ice Warriors, some aliens they've met before, from Mars. I wonder if they know about the pyramids? Anyway ...

They land safely. The Doctor meets the man he'd been speaking with, while Zoe and Jamie refuel. The Doctor encounters first one Ice Warrior and then a small group of them, before being taken to their leader.

Zoe discovers the rocket's engines have gone kaputs, and she and Jamie go off to find the Doctor and another way off the base. They keep barely avoiding the Ice Warriors.

Whenever this story takes place, humans no longer travel by car or rocket, they use T-Mat - transporters. The main hub is on this moon base, and the Ice Warriors have come to take over the base and use T-Mat for their own purposes. They will transport down some sort of seeds to every major population center on the planet.

One of the seeds opens. A heavy, smokey gas pours out of it, causing the Doctor to pass out. They grab another seed and T-Mat it over to the second base. As the workers watch in awe, it slowly expands ...

MUCH better than the previous episode. We actually see things happening, and there seems to be some plot developing. I'm still unclear what purpose these seeds have, but at least there's *something* going on, not "stretch stretch stretch" as in the previous two episodes. It's also refreshing to see Zoe acting along with the story, instead of being little more than window dressing.

The seed pops and people start dying from the seed's gas. The Ice Warriors continue sending seeds to more cities on Earth.

On Earth, after the gas goes away, Ice Warriors appear. Apparently, they are grown from the seeds. Or something.

The rest of teh episode is people walking around in various locations and combinations, sometimes this pair, sometimes that trio.

After 25 dragging, painful minutes, we are blessed with an ending. Oh, right, it's Zoe getting herself caught by standing still and letting the leader of the Ice Warriors see her.

This story is painful to the extreme. Nothing happens. Everything in the episode could be summed up by about two lines of dialog. Blah. Blah. Blah.

The only other thing I'll say here is wtf is up with the Ice Warrior leader's voice? Seriously, I think he should be calling in a doctor to take a look at his throat.

Three writers, and this is the best they can come up with? Ugh.

I've got nothing else to say about this one.

Episode 5
The temperature warms up, the Ice Warrior passes out, and Zoe walks away. All the humans T-Mat back to the first base, except the one who'd been working with the Ice Warriors.

But they kill him anyway.

The Doctor rushes off to rescue Zoe and Jamie from trap number 1701B and gets caught. By bubbles.

What we learn here: 1) The Ice Warriors are trying to take over Earth. Their seeds, besides giving off gas, are a seemingly endless supply of bubbles. Think giant bubble bath, the size of Earth. If it works, the bubbles will replace the atmosphere with one identical to Mars. 2) The Ice Warriors can be killed by tropical temperatures. 3) The seeds and bubbles can be stopped by water.

That's right. The evil dudes' whole disastrous plan can be undone by rain. And on a planet that's like 3/4 water, it can't possibly be undone, right?

Episode 6
The Doctor is saved by Zoe. He kills the Ice Warrior with a complicated bit of gobbilty gook speech and two handheld devices that basically look like giant boobies.

Then, he T-Mats up to the moon, turns off the homing signal, adn the invasion fleet flies into the sun.

Jamie T-Mats up and they kill the Ice Warriors there. The rain starts. The crew hops into the Tardis and away we go.

This was a really excellent two-part story. If only it wasn't told in six parts. There are worse Doctor Who stories, but I can't think of any right now. Ugh.