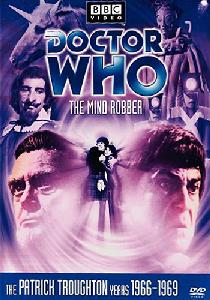 The Tardis lands in the middle of a lava flow. Zoe thinks it's super fun, but The Doctor and Jamie are losing their ever-loving minds. The only way out is to use the super duper escape thingamabob. It'll dematerialize the ship and take them "nowhere" in some alternate space and time.

While The Doctor goes into a secret new room to reverse the polarity and think about Jamie in private, Jamie and Zoe see impossible things on the tv. Jamie sees Scotland; Zoe sees her home city. Jamie, acting rationally, decides that whatever is on the tv may or may not be real, but he better go and make out with the Doctor first before going off on an adventure. Zoe, left all alone in the Tardis control room, does exactly what she said she'd do. She opens the door and walks out.

She finds herself alone in ... mist. There is nothing around as far as her eye can see. She's not looking two feet to her right, where she'd be able to find a wall, but she's not a bright girl. Jamie, feeling much more relaxed after his alone time with the Doctor, goes off to rescue the damsel in distress. They meet up and chat for a bit, before deciding that neither of them remembers the way back. They wonder arround and eventually find themselves surrounded by speechless robots.

Inside the Tardis, the Doctor is dreaming of Jamie, who is all dressed up in white in this dream. He wakes up and goes to rescue Jamie. As long as he's out there, he grabs Zoe too.

A humming sound overpowers the crew and they all pass out. And then the Tardis explodes. They appear to wake up and grab onto whatever piece of the ship they can hang on to. Jamie and Zoe float around on the control center, while the Doctor is off in the distance, floating away.

I dunno WHAT Peter and Derrick were smoking when they wrote this script, but man ... it must have been mind altering. The actors sure look like they're having fun. This isn't drama, it feels like three friends hanging out and having a good time.

I'm sort of waiting for this new Zoe character to fall down and have a problem with her ankle, or start screaming "grandfather!". She sure seems to have been created for that slot. That's all I'm saying. Wait ... Ok, Victoria's gone, that's right. That's the problem with so many missing stories. The companions come and go so fast, they become interchangeable.

Somehow, they escape. Jamie gets frozen as a cardboard cutout, while Zoe walks around calling his name in the shrillest tone she can manage.

The Doctor wakes up, calling Jamie's name as he does. He goes off to find his boy toy. He keeps avoiding weird creatures, then runs into Gulliver (from Gulliver's Travels), then a group of children who challenge him to mind games.

He gets all excited when he hears Jamie's voice, but finds the cutout instead. He begins touching the picture, in a not-for-children sort of way. Through a convoluted series of events, the Doc must rebuild Jamie's face. But he does it wrong, and what pops out is a new, taller Jamie.

They rescue Zoe from a jar, and meet up with Gulliver again. But he departs with giant toy soldiers, leaving our heroes wondering why a unicorn is charging at them.

I had heard of the "alternate Jamie" before, but hadn't seem him before this. I know of the story - Frazer Hines, who plays Jamie, came down with a case of the chicken pox after filming the first week. He was not able to make it to film the next two weeks, and they rewrote the script to account for a temporary change in the character's appearance.

As much craziness as there is going on here, it's not the weirdest thing that happens.

The Doctor convinces Zoe and not-Jamie that the unicorn doesn't exist. As soon as they believe it, it stops.

Jamie gets turned back into a cardboard standup, and the Doctor remakes his face, and real-Jamie is back. They continue exploring, inside a large maze. Zoe and the Doctor find themselves facing a Minotaur. Repeating that it doesn't exist, they easily make it disappear.

Meanwhile, Jamie challenges one of the Nutcracker Soldiers, following it through the tunnels, then into a rock quarry. He begins climbing, then gets help from Rapunzel and her hair. No, seriously. Rapunzel.

The Doctor and Zoe, though, find themselves in front of Medusa herself, snakes and all. The utterly useless Zoe just screams and screams and screams, helpless while the Doctor tries to make her understand that, just like the last two times, it's not real.

I'm mostly ok with this, right up until the end. And then it just loses me. The Doctor has trained Jamie and Zoe to understand that whatever they think, it happens here. It's kind of like that episode of Star Trek, "Shore Leave," which aired around the same time as this story. Anyway, they understand. Jamie starts using this knowledge to help himself ... thinking he needs help up the wall, and finding Rapunzel's hair, for example.

First, the unicorn, and it takes a bit of time, but they get it. Then the Minotaur, and almost instantly Zoe's like "Oh yeah ok dude, it's all in my head." So Medusa comes along, and we suddenly forget that all she has to do is say out loud "it's not real" and the image goes buh-bye? She's supposedly this brilliant mind (or so she says early in this episode), and she completely forgets what just happened not ten minutes ago?

Nice to have real Jamie back, though.

The Doctor escapes. Grudgingly, he saves Zoe as well. But they find themselves facing down a fictional character from Zoe's world, a thinly-disguised Batman ripoff. They defeat him and head toward the castle where Jamie and Gulliver are having a chat.

They all talk, then Zoe acts like a total idiot, causing them to be captured by the robots from episode 1.

They are taken to the guy in charge, named The Master. He's not the same Master we know from later in the series, he's just a guy who has the same name. Anyway. This Master dude wants the Doctor to be his replacement. It's the same scenario as Spock's Brain, and almost as well executed.

Jamie and Zoe try to escape but end up being pushed into the pages of a very large book.

No, seriously, what the hell was he on when he wrote this shit? I just have to keep reminding myself that in one more day, this story will be over, and we'll be doing The Invasion. Until then, one more stupid-ass episode to go.

The Doctor walks out of the Master's room and finds not-Jamie and not-Zoe, but doesn't realize they are fakes.

He meets the other fictional characters we've seen in the previous episodes, then gets captured by not-Jamie. The Master explains his ultimate plan, which is about as convoluted as it gets.

The real Jamie and Zoe escape from the book.

The Doctor and the Master have an epic - and utterly stupid - brain fight. They end up being rescued by Jamie and Zoe. They all escape, dragging the Master with them. He was a prisoner as well. The Tardis reforms, and presumably they escape. We don't know, cuz it just ends that way.

One absurd thing after another. I was waiting for a kitchen sink to appear. And that's all I've got to say about this mess.

Next up - The Invasion.