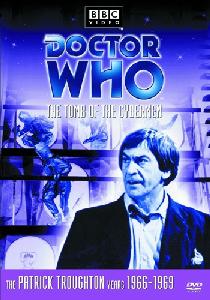 The Second Doctor shows Victoria around the Tardis while he and Jamie explain how it works. The Doctor says he is about 450 Earth years old.

On a planet named Telos, an expedition is exploring, searching for the Cybermen.

The Doctor and his new crew arrive and discover the expedition. He assists them in opening a door into the lobby of the Cybermen's Tomb.

In the lobby, the combined group splits and goes to search in the tomb. There are two doors and a circular hatch to explore.

Though he doesn't know what it is, Jamie finds a Cyber-Mat. Elsewhere, The Doctor gives the Professor the clue he needs to turn the control panel on, powering up the whole place.

In another section of the tomb, Jamie operates a hypnosis machine. And then he presses the wrong button, releasing ... a Cyberman!

So many things to talk about here.

1 - The new opening titles. The Doctor's face is now in the opening credits, something that is carried through all the way to the Seventh Doctor's era in the 80s. The new music sounds almost like rock and roll!

3 - The new Doctor ... Ok, I saw this story a few years ago. I've mostly forgotten it, except for having positive feelings about it. I remember really, really liking it. My knowledge of this Doctor is therefore mostly from the reunion shows - The Three Doctors, the Five Doctors, and the Two Doctors. In those, he is cartoonish, nothing more than a little clown. He's nothing like that here. He's mysterious, dramatic, and dangerous. He also possesses a keen scientific mind.

4 - The Cybermen! My favorite original series baddies. They're the only baddies that actually scare the Daleks. And rightfully so, too!

5 - The script is tight, superbly-written, and the director did an amazing job. So did the set builders. The whole thing deserves a five-star rating.

6 - There are pyramids on Telos. Well, at least one. It's seen far off in the distance, but I can't help but think they could easily connect these pyramids with the ones on Mars.

The Cyberman disappears. The Doctor tells Jamie to push teh buttons on the control console in the same order as before. The Cyberman comes out again. The Cyb, it turns out, is just a target, no life time to.

Everyone returns to the lobby. The rocket's captain informs them that there is damage and they cannot take off. It will take 72 hours before the damage can be repaired. He will go and do it, and there will be a guard on the ship. Anyone who approaches it will be shot.

Mr. Klieg figures out how to open the hatch. Everyone except the two women will go down inside. Victoria is told to watch Kaftan. Kaftan is the sponsor of this expedition, financing the trip. But she has ulterior motives, and is working against the rest.

Downstairs, they find the real tombs of the Cybs. They look like a gigantic frozen honeycomb. Above, Kaftan has poisoned Victoria's drink. As Victoria passes out, Kaftan closes the hatch, locking the men inside their frozen grave.

Klieg finds another control device. As the Doctor watches, he flips switches, believing it to be another way of opening the hatch. But he's wrong.

It quickly gets warmer, and as the room thaws, the Cybs awaken. One of the men, Viner, panics and reverses the button-pushes. It starts getting colder, and the Cybs re-freeze. As he stands there, triumphant, the evil Klieg murders him.

He re-does the buttons and the Cybs wake up again. As this happens, a loud beeping wakes up Victoria. Her bag starts moving - the bag which contains a Cyber-Mat.

She freaks out when she notices the hatch is closed and rushes over to the controls. Kafta stops her, pointing her gun at the young woman. The Cyber-Mat escapes Victoria's bag.

Victoria tries to war Kafta about the Cyber-Man behind her, but she won't listen. The Mat flies up and lands on Kafta's shoulder. Victoria knocks it off, grabs Kafta's gun and then rudely shoots the poor Mat. With Kafta passed out, she goes in search of the Captain.

Now well-rested, the Cybs release their Cyber Controller. Klieg tells the controller that it was his idea to wake them up, that he is in charge of the Cybermen. Fortunately, the Controller has a better idea. Klieg will get to become a Cyberman himself!

Oh yeah. It's every bit as good as I remember. There's scandal, intrigue, science, and murder. In a way, this is almost like an Agatha Christie story, set in space.

There's just enough of the baddies to keep the viewer interested without giving away too much, and the characters are behaving consistently within their own nature. With such a large cast, it would be easy to have ... well, interchangeable characters. And that doesn't happen. Major kudos to the writers.

Back in the 60s, people had to wait an entire week to find out how the Doctor would find his way out of this predicament. I'm finding it hard to wait just one day. I don't know how people managed back then.

Another thing I want to mention is the music. When the Cybs first wake up, the music subtly changes to incorporate metallic, robotic tones. It's subtle, but fun too. Nice job.

The Doctor figures it out. This whole place is a trap, intended for those with superior minds. The Controller confirms it.

Victoria returns with the Captain. It sounds like he wasn't quite as serious with his threat to shoot people after all.

The Controller remembers the Doctor. He blames The Doctor for the destruction of their home planet, which is why they attacked the moonbase. They froze themselves on Telos to survive.

Everyone but Jamie is captured. He escapes temporarily, then is shot by electricity.

With Victoria's help, the Captain opens the hatch, then he climbs inside. He throws a smoke bomb and yells at the others to run to the escape ladder. But not everyone escapes. Toberman, a giant man who serves as Kafta's bodyguard, is taken and the conversion begins. Klieg is also there, though the Cybs don't know it. And he escapes.

The Cybs release the Cyber-Mats. Klieg and Kafta find the Cyber-Weapon in the testing room. Klieg goes mad with power, takes the weapon into the lobby and fires at the Doctor.

This one has it all. Drama (The Doctor talking with Victoria about her father and the Dalek attack), romance (the Doctor and Jamie), insanity (Klieg), terror (the Cybermen), cute little animals (the Cyber-Mats), death destruction, and flying.

It's funny when the bodyguard dude gets picked up and tossed against the wall by a Cyb. They make no effort to hide the harness and wire. I know, it was filmed when most people had black and white tv sets that were, at most, 12 inches. Stuff like that, they probably figured people wouldn't be able to see. 42 years later, I can see it. And it gave me a case of the giggles.

Something else I've noticed ... Patrick doesn't seem to have the same dialog problems Bill had. That, or they could take multiple takes. It still has that "live" feel, so I'm thinking better memory.

Three episodes down, three excellent episodes. One to go.

Yay! Klieg missed. But he opens the hatch. Boo. Some of the Cybs go back to their pods to recharge. Bodyguard Toberman has been Cyber-converted.

Klieg thinks he's in command of the Controller. We call him an idiot.

The Doctor appears to take pity on the Controller and allows him to recharge. It's a rouse, which he uses to lock the Controller up in a recharging station. It SO doesn't work.

Yay. Bodyguard kills Klieg, and the Controller kills Kafta. The Doctor intervenes and snaps Bodyguard out of it. Then Bodyguard tries to kill the poor Controller.

Um, Klieg is alive again. But the Cybs kill him again. The Doctor refreezes the Cybs. He then booby-traps the whole complex. They depart, not realizing one Cyber-Mat has escaped the complex, leaving the door open for Cyber-returns.

Death, uh, doesn't mean much here. Klieg dies, but returns. The Controller dies - even his head pops off, but returns. If it had just been one, I'd think it was an error in the script. Since it's more than one, I don't think it's an error. I think it's on purpose. And it opens possibilities for the return of anyone who died in this story.

The Doctor sure is a conniving little man. He's always thinking at least five steps ahead of everyone else, and tricks people into doing exactly what he wants them to.

Victoria is quickly coming into her own, and I like her character's growth over these four episodes.

I absolutely adore the Cybermen hieroglyphs we see on the walls. It's the first thing I've seen in this project that makes me think WANT. As in, I want that on my wall. It's a combination of like ancient Egyptian-style with futuristic spacey stuff.