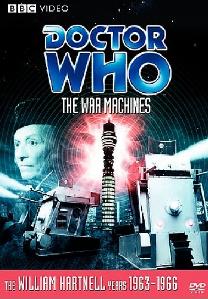 The Doctor and Dodo step out of the Tardis and onto then-modern London. There is a strange alien tower in the distance, and off they go to investigate.

Inside the tower, they are welcomed with open arms by the scientist in charge of creating a massive supercomputer he names W.O.T.aN. He also introduces his assistant, Polly.

Polly takes Dodo to a nightclub, where we meet Ben, a sailor who fancies Polly.

Slight complication with W.O.T.aN - it can hypnotize human minds, forcing them to do its bidding. And it uses its slaves to gather new slaves, taking over each in turn.

It orders them to bring The Doctor as its next victim.

It's a pretty good episode, but with the exception of The Doctor, I don't know any of them. Dodo references Steven, so this must be sometime after his departure. Beyond that ... *shrug*

Polly and Ben are joining the Doctor, and this is the only released serial in which Dodo appears. So ... yeah.

As for the story itself, it's one we've all heard so many times before - a supercomputer is built and tries to take over the world.

I'm pretty sure I've seen this story before, but it still feels new ... fresh, somehow. And it seems like The Doctor has calmed down considerably over the last few stories.

W.O.T.aN orders its slaves to create war machines and to gather more, suitable slaves. Dodo finds The Doctor in the night club and gets him outside, but Ben interferes with her programming, procuring a taxi himself.

Work progresses steadily on the machines.

Dodo repeatedly tries to get The Doctor to go back to the tower, but keeps getting foiled. The Doctor realizes she has been hypnotized. He de-hypnotizes her and says she'll be out for 48 hours.

After many tests, the war machines hit the streets.

Bye-bye, Dodo. It's a really crappy way to lose ya. But, only two episodes doesn't really give me much to care about you, ya know?

Uh oh! Polly's been taken over and Ben tries to free her. She allows Ben to stay and work for W.O.T.aN - without being hypnotized. He eventually escapes and makes his way to The Doctor, telling him what's going on.

The army is on the scene, moving against W.O.T.aN and its war machines. It knocks the stuffing out of them, and the episode ends with the machine bearing down on the Doctor.

There isn't a lot to describe here. I'm reminded of that scene in Dalek Invasion of Earth, when Barbara is running through the deserted streets of London for a long sequence.

But in this case, it's even longer. Seven minutes - SEVEN! - with the army fighting the war machine. There's a bit of dialog, but it's just one long fight scene. In an episode that is barely twenty two minutes (even less without the credits), seven minutes is a huge chunk of time.

It also shows that the army is really rather lame. No wonder Unit is so awesome - when they finally show up, several stories from now.

The Doctor escapes, by simply walking away. He works with the army and other scientists, and discovers W.O.T.aN was turned on before it had finished being programmed. He also discovers there were 12 war machines built.

With the army's help, he captures and neutralizes one of the machines, then reprograms it.

The war machine destroys W.O.T.aN and all those who had been under its control are freed.

The Doctor returns to the Tardis. Ben and Polly meet him, and Polly tells him Dodo has decided to stay behind. After he enters his ship, they sneak in behind him.

Ok. Not bad, not great. Nice intro for Polly and Ben, the first companions who witness a regeneration, a few stories from now.

This story is the first (in order of my viewing) to stop giving individual episode titles. Now it's "Story Name, Episode 1, Episode 2" etc. It may have happened in an earlier story, but not one that has been released so far.

The ending is bittersweet. Of the released stories, this is the final one to star William Hartnell as the Doctor. Yes, he returns for The Three Doctors, and there are other episodes on Lost in Time, but in a way, we're saying goodbye to this Doctor here.

Some time next year, we're supposed to get The Keys of Marinus. That's another early story (one set right before The Aztecs).

But this really is it. This is story number 27. All four episodes of the next story, 28 (The Smugglers) are lost. And 29 (The Tenth Planet) is Hartnell's last. That's when he regenerates to the Second Doctor. In that serial, the first three episodes exist, but the final one, all but the last 20 seconds are lost.

Next up is one of my favorite stories of the series, Tomb of the Cybermen.