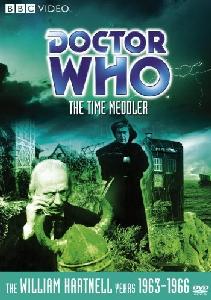 Episode 1
"The Watcher"
Written by Dennis Spooner
Directed by Douglas Camfield
It's just The Doctor and Vicki. She looks depressed, and tells him that she will miss Barbara and Ian. It's just the two of them now. They reminisce about their travels, until they hear someone else in the Tardis - Steven.

The Tardis materializes on a beach. Watching it is a monk.

On the beach, Steven argues non-stop with The Doctor. The old man goes off exploring. Steven and Vicki go in another direction. The Monk listens in on their conversation, then as soon as they are gone, begins examining the Tardis.

A woman finds the Doctor and offers him refreshments. She looks familiar, but I can't place her just yet.

Through careful questioning, the Doctor determines it is the year 1066, late summer. He also questions her about the monks - their singing has been going on nonstop since she found him.

The Doctor arrives at the monastery. He explores inside and discovers a record player playing a recording of monks singing. As he does, a cell door shuts, locking him inside. He's trapped inside as the monk laughs.

It's so much better than The Web Planet, it's like they aren't even part of the same series. The Doctor is funny, cantankerous, mysterious, and curious. He talks about Susan, yes, but it's clear he thought of Barbara as a friend and trusted confident, and he's missing her terribly.

I'm not sure about this Steven character yet. He seems designed just to be a jerk. He doesn't think things through, and refuses to listen to anyone. At this point, he is a very sad replacement for Ian.

Apparently during The Chase (the story that aired before this), Vicki and the gang were in New York City, at the top of the Empire State Building, fighting Daleks. I didn't know about that before, but it brings up questions about the Tenth Doctor story "Daleks in Manhattan" ... Are the stories tied together? Did DiM somehow lead into The Chase?

Very entertaining, and kept my attention.

It's morning as the Monk cheerfully prepares breakfast for the Doctor. But the Doctor isn't hungry and tosses it back at him.

Vicki and Steven argue, repeatedly, then get caught by villagers.

The Monk is out looking for the Tardis when he spots a different kind of ship approaching - a Viking ship. This excites him.

The woman who assisted the Doctor last night appears in the village and convinces the leaders that the travelers mean no harm to them. They are released and offered food and provisions for their journey.

The Vikings make land and split up, concealing their arrival as they do.

Vicki and Steven arrive at the monastery, looking for The Doctor. The Monk lies, telling them he hasn't seen him, but provides a perfect description, something they didn't give him.

The kind woman is in the woods when she is kidnapped and left in her bed, unable to speak. Her husband blames the travelers and arranges a search party.

But the party is attacked by the Vikings. Much death ensues. The survivors head for the monastery for medical assistance.

And that's where Steven and Viki are breaking in. The Monk sees them inside, but the two survivors are outside, knocking, and he goes to answer the door. Steven and Vicki find the record player, then the Doctor's cell. But he's not in the cell anymore.

I'm still enjoying it. The woman playing Edith seems so familiar still. I pulled out the Television Companion and figured it out - she was the main cave woman in the first story, An Unearthly Child.

There's so much going on here, it's hard to predict where we'll go next. The biggest shock was the Doctor's disappearance, I think.

Except for one line of voice-over and the recap at the beginning, the Doctor doesn't appear at all in this episode. Must have been his turn for vacation.

The Monk leads the villagers to a room inside and tells them to stay there, he'll be back to tend to their wounds.

In the Doctor's cell, Vicki and Steven find a hidden passageway and enter, hoping to find the Doctor. They're gone when the Monk comes to investigate.

The woman - Edith - is feeling better and can talk now. The Doctor finds her and they have a restful chat.

Everyone is heading to the monastery - the Doctor, who takes the Monk prisoner with a gun ... the sick people ... the Vikings ... the travelers ...

The Vikings enter, take The Doctor prisoner, and lock him back in his cell, but it takes about two seconds for him to escape.

Vicki and Steven make the single biggest shocking discovery at this stage of the series - the Monk has his own Tardis, and they go inside.

Holy moly ... Another person of the Doctor's species. Until now, we only knew The Doctor and Susan. Now there's another, and all we know is that he's up to no good. This is HUGE!

He works with the Vikings, and they overpower the Doctor and his companions. The villagers figure things out and attack the Vikings. The woman frees our heroes and the Doctor plots against his kinsman.

While the Monk is hiding, the Doctor sabotages his Tardis, leaves and note, and the crew returns his his ship.

The Monk's Tardis is no longer functional, and the Monk is marooned in 1066.

Nice new ending credits. I quite enjoyed this one, especially the Doctor's meeting on of his own. In every way, this is the Doctor's path-not-taken. We see what the Doctor could have been, had he chosen to meddle in time, instead of just observing.

I loved every episode of this story, and it's a must-have for fans of the series.