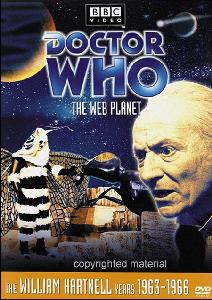 The Tardis has materialized on a rocky alien world. There are giant ants walking around outside. Inside, Vicki is hearing a high-pitched noise which the others cannot hear.

The Doctor and Ian nervously explore the area outside the Tardis. They find what is, I think, the first pyramid shown on a world other than Earth.

Barbara, wearing the bracelet given to her by Nero, is somehow taken over by the giant ants, known as the Zarbi, and walks outside, led by the gold bracelet.

Vicki, finding the door open and Barbara gone, starts screaming Barbara's name. The Doctor and Ian hear and run back, only to run into giant spiderwebs.

The Tardis tilts and turns. Vicki runs into its controls and starts flipping switches. The Doctor looks over, and ... it's gone! He says "My Tardis!" as we fade out.

Not bad. Not bad at all. We get just enough visuals of the Zarbi to know they're the monsters of this serial, and an alien landscape, with a non-functioning Tardis, placing our people in grave danger.

The follow-up to The Romans was welcome as well, when Barbara talks about getting a present from Nero. Typically, unless the story is a direct follow-up to a previous story (The Daleks/Dalek Invasion of Earth, for example), previous stories aren't referenced.

Barbara and Vicki arguing over medical practices was also well done, reinforcing the idea that Vicki is from a time distantly removed from Barbara's, something that was missing in Susan's interactions with her teachers.

The Doctor tells Ian the Tardis is gone. Barbara is still walking in a zombie-like state.

The Tardis didn't dematerialize after all. It is being dragged across the surface by the giant insects, with Vicki inside.

Barbara is surrounded by giant bees. One of them removes her bracelet and she wakes up, her head in pain. She then realizes she's surrounded. Later, she tricks them and escapes.

The Doctor and Ian are surrounded by Zarbi, the giant ants.

The movements stop and Vicki leaves to explore. And then she gets surrounded. Vicki, The Doctor, and Ian are reunited outside the ship.

Barbara gets surrounded. This time, by the Zarbi. They force her to the giant bee's location. The giant bees are called Menoptra.

The Doctor keeps trying to get into his ship, but the Zarbi won't let him. They drop webbing on him and ask "Why do you come now?"

A boatload of sets, tons of actors, and a script designed to keep the cast separated, combined with a decent writer (other than the surrounded bits ... the drinking game writes itself), and what do we get? A pretty good episode.

I'm still enjoying the "live" feel of the show, where actors flub their lines and microphones get in the shot. A lot. It's not polished, it's not perfect, and I am enjoying it a lot.

The Doctor is interrogated by the Zarbi. He agrees to work with them and is allowed to go in the ship with Ian, but Vicki must remain outside.

The Doctor manages to put the Zarbi to sleep. Ian goes off to find Barbara while the Doctor and Vicki play with the controls.

It doesn't work. Ian is captured and new Zarbi show up. But he is rescued by a Menoptra. This Menoptra gives an infodump telling the audience why they are fighting the Zarbi. More Zarbi show up. Ian and the Menoptra hide.

Barbara doesn't appear here as the actress was on holiday while it was filmed. There is no action, and there's a complete show-stopper while the Menoptra drones on.

I suppose if one were to watch this serial in one long session, it wouldn't be noticed, but I'm doing this one episode per day, and as such, things do get noticed. One is that fully one quarter of this episode is an infodump, where the Menoptra goes on, and on, and on, giving nothing but dialog. It's telling, not showing, and it fails. With little exception, nobody does anything, they just stand around and talk. Coming off two really well-done episodes, this one is incredibly boring.

Ian and the bee fall down and get surrounded by a third group of insects.

Barbara is doing slave labor with wingless bees. They escape.

The Doctor and Vicki are surrounded, and the Zarbi put zombie necklaces on them (they take the person over, like Barbara earlier with her bracelet).

Barbara and the wingless bees meet up with a landing party of bees from space. They get surrounded.

This sucked. Start to finish. It wasn't even fun padding. It was just nonsense. I kept thinking if this was the sort of thing I had to look forward to, I'd end the project now.

Characters escape. They get surrounded. Repeat. A lot. Call it a script, cash paycheck. Bill Strutton, writer of this script, can fuck off.

The Doctor and Vicki escape and take a Zarbi prisoner.

The Doctor and Vicki wake up, still in their trap.

The bees, with Barbara, capture a Zarbi and tease it by making funny noises.

Ian and the not-bees climb to the surface.

The Doctor and Vicki escape, then get trapped again by a giant ... um, well it's kind of like a spider monster, with dozens of tentacles ... and they both pass out.

Barbara and the bees find the Doctor's equipment. But then they get surrounded by the Zarbi. Then they all go to the spider-monster's room for a reunion. The monster dies, and everybody is suddenly peaceful, so the Tardis crew leaves happily.

Bill Strutton should be shot. If he's dead, his corpse should be reanimated and shot repeatedly. This is nothing more than a disjointed mess. The only thing I can possibly say that's positive about this giant ball of shit is that we finally have a story that just ends, instead of having a minute or so directly leading into the next story. This gives us a prime spot for adding "missing adventures."