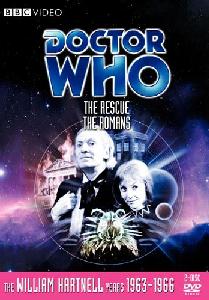 The Tardis lands at the bottom of a valley.

In a Roman home, The Doctor and Ian are dressed up in period clothing. They've been there for a month.

The Doctor announces he's going to Rome for a few days. Ian and Barbara are left behind, sulking.

A Centurion and his aide are kidnapping people, forcing them into slavery. They are coming for the Tardis crew. Good thing two of them are already gone.

They are on a road and discover the body of a musician who had been killed recently. The Doctor picks up the man's lyre just as a soldier comes along. He is mistaken for the player, Maximus, and is to be taken to Emperor Nero.

Ian and Barbara are separated - Ian is sold to other slavers who are going in the other direction.

The man who killed the musician is now trying to kill the Doctor. He is outside the Doctor's bedchambers, sword in hand as we fade out.

So far, it's an OK story. There are a few comedic moments, such as the "fridge" moment. But this episode just isn't impressing me.

I hope the next episode is better, cause this one is really "blah" ... I mean, it's not BAD, it's just not GOOD.

The assassin enters the Doctor's room and they fight. The Doctor kicks the stuffing out of him, then he jumps out the window.

On a slave ship, Ian has been rowing for five days. He makes a half-hearted attempt at escaping, but doesn't even make it one step away. A storm throws the ship, and Ian is struck by falling debris. He awakens on land with another slave named, I think, Delos.

At a slave auction, Barbara is sold to a man named Tavious. Tavious is a servant of Nero, and he welcomes "Maximus" (The Doctor) and Vicki. Immediately after, Nero enters and begins belching. Loudly. Vicki goes bananas over him, being a total fangirl. The Doctor cons him into playing the lyre, then says he could never play as well as Nero, which allows him to continue with his charade.

They later go into a waiting room, and find the body of the centurion.

Ian is captured, locked away, and told he will be fighting in the arena.

The Doctor and Barbara keep missing each other. I think there were three times when one would never just as the other was leaving. If at any time one was delayed just by a second, they would have seen each other and The Doctor would have freed her.

There are many instances of outright humor, mostly centering on the Doctor and Nero. When the two of them are together, it's instant comedy ... I'm hoping I get to see more of it in the next two parts. This isn't the DRAMA of Fires of Pompei, another adventure the Doc had in this era. This is comedy gold. Well, except for the whole slavery bit.

Vicki and The Doctor explore the area. He reminds her not to go about changing history.

Nero has a full bedroom, between him, his wife, and their various attendants. Barbara is introduced as the newest house slave. She is put to work cleaning their room.

You know that old Scooby Doo trick, where various characters chase each other down hallways, and through doors in the hallways? It's played here with much comedic affect, as Nero chases Barbara, complete with The Doctor, Vicki, Barbara, his wife, and others playing along.

There is a giant feast in the palace. The Doctor and Vicki enjoy themselves, until Nero picks The Doctor out of the crowd to play his lyre. The playing is hilarious, and blows Nero's playing out of the water. But, in full drama queen mode, Nero decides he's going to feed the Doctor to the lions, because he got more applause than Nero usually does.

In front of just Nero and Barbara, Ian and another slave fight with swords. Ian loses, and Nero orders his death.

Again, loads of comedy. Hartnell is obviously enjoying himself here, he's like a kid in a candy store. The guy playing Nero is completely over the top, and in a comedy story like this (at least, last part and this one), it works, and well.

Barbara and The Doctor keep just missing each other. And now that she and Ian have seen each other, it's only a matter of time before the crew reunite. Well, especially when you consider there's only one episode left in the story.

Despite being a historical, there isn't much we learn about history. Instead, it's more about comedy and almost-meetings. If only the first episode was better, this would be a can't-miss story. The Rescue was brilliant, then a boring episode, then two more hilarious episodes. I can't wait to see what happens in the next episode.

Things go according to plan, and the other slaves revolt. Ian escapes.

The Empress has had enough of Nero's infidelity, and orders Barbara's dismissal, in whatever form it needs to take. She orders Tavious to take care of it. He warns Barbara, who in turn tells him about Maximus going to the lions.

Nero sets his sights on the Doctor, who is studying a map of then-modern Rome. While Nero is ranting, a small fire starts behind the Time Lord, and Nero blames him for the destruction of the maps. He orders the Doctor's death, then in the same thought, reverses it, saying he's a genius, because it will allow Nero to do exactly what he's been wanting to do. He is going to burn Rome to the ground and rebuild it in his image.

Tavious helps Ian and Barbara reunite and escape. Nero sends his soldiers out to burn Rome, while he stays behind playing his lyre. The Doctor and Vicki escape.

Back at the villa, the four reunite, and head off again for the Tardis.

Inside the ship, the Doctor reveals they have materialized somewhere, and they are slowly being dragged down ...

This episode is not something I can take seriously. Cuz it's not supposed to be serious. It's comedy, it's all comedy, beginning to end, with tiny little bits of seriousness scarred here and there. Everyone is having fun, and the whole thing seems effortless. It's like the cast and crew showed up and decided to play, and have fun.

I can see bits of the Tenth Doctor here, when Vicki accuses him of interfering with history. He instantly tells her he did no such thing, and then his smile begins to widen, and you just know he's playing.

Ok, the first episode dragged, it was dreadful. But it was followed by three episodes which were comedic gold, and it's a very nice streak.

Next up is The Web Planet.

Oh, and this is episode number 29 down. A whole lot to go.