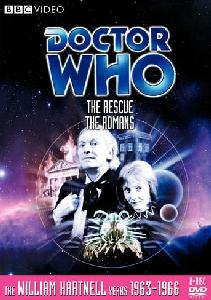 Vicki and Bennett are two survivors of a crashed spaceship who are trapped on a planet named Dido. Vicki is young, perhaps in her late teens or early 20s, physically fit and quite a nice, pleasant young lady.

Her companion, Bennett, can barely move, appears to be in his mid-30s, but acts much older, and is apparently suffering sickness as a result of the crash.

While awaiting rescue, she picks up the Tardis on her scanner, and gets excited, thinking it's a rescue ship.

Inside the Tardis, the Doctor isn't quite himself. He forgets Susan isn't there. He allows Barbara and Ian to explore while he goes back inside to sleep.

Barbara and Ian find the wrecked vessel, but then encounter a "monster" who pushes Barbara off the edge of a cliff, where a shadow forms around her. Fortunately, that shadow is Vicki.

Ian rushes back to get the Doctor, and they set off in search of their missing companion. They hear another monster, then see it. There is an accident, and Ian is trapped on the cliff's edge.

As with his previous story, Edge of Destruction, this story is a "filler." This time, it is a filler that is used to introduce the new companion, Vicki. She is Susan's replacement. And as before, Whitaker takes a simple throwaway premise and makes it fully engaging and entertaining.

The Rescue was just recently released on dvd. Prior to my watching it for this project, I had never seen it before. I'm not sure why they didn't release it sooner, unless The Romans is a real dog. The two stories were released together in a set, and are not available separately.

Some fine acting range is shown from Hartnell especially. He goes from kind and tender to complete wackjob crazy in the same breath. And, having just lost his granddaughter, it makes sense.

Roy Barrett plays Bennett here. It seems strange timing for me. I had never heard of him before today, but only hours before watching this, I saw a post online. Mr. Barrett has passed away. I didn't connect the name with the actor until reading the end credits, then confirmed it on a few Doctor Who sites. He does a very nice job with the character here, and my condolences go out to his family and friends.

On the cliff's edge, Ian is trapped. Monster #2 is down below, and there are razor-sharp blades now protruding from the walls. The Doctor helps Ian escape.

Vicki goes to collect some water. Barbara looks out and sees Monster #2, shoots and kills it despite Vicki's begging her not to. It was doing her no harm, basically was her pet, and she is super pissed at Barbara. The Doctor and Ian follow the sounds of the shooting and meet up with them in the crashed ship.

Barbara and Ian talk with Vicki - while all are from Earth, there are nearly 550 years separating them. They explain how the Doctor travels in time. She thinks they're joking.

The Doctor goes to have a chat with Bennett, but he's left the room. The Doctor finds a trap door and follows a hung, leading into a ginormous set, the Hall of Judgement. The first monster enters. The Doctor calls him Bennett. He knows.

Bennett had killed a crew member. The then killed the rest of the crew, leaving only Vicki and himself. When they crashed, the peaceful people of Dido offered them compassion. He repaid them by killing them all, as well. He plans on blaming it all on the monster when the rescue ship comes, and leaving all the murders behind.

The fight, but just as he is about to kill the Doctor, two Dido men intervene and chase him to the cliff's edge, where he falls to his (presumed) death.

The Tardis crew returns to their ship. The Doctor tells them everything, then goes out to invite Vicki to join them. She accepts.

Later, the Tardis materializes ... someplace. And then promptly falls over the edge, dumping the crew all over the place.

I. Love. This. Story! Hartnell is surprisingly tender whenever he's alone with Vicki (Maureen O'Brien). He is usually grumpy and crotchety, and it's refreshing to see him like this. The writing is strong and the set design is very impressive. I loved the interiors of the doomed ship, and it seems like they must have spent the budget for several stories on the ship and Hall sets.

Vicki seems a welcome addition to the crew. She is a spit-fire, strong-willed, but open to new experiences and ideas.

The video is brilliantly clear. In one early scene, in a dark cave set, with Ian and the Doctor making their way along, I could see a fly buzzing right behind the Doctor. Considering that's black on black, on video almost fifty years old, the restoration job is amazing.