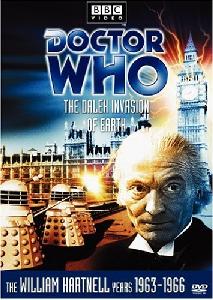 The Tardis materializes ... somewhere. They eventually realize they are on Earth, but when? The group explores the area immediately outside the ship. They don't see any people, but Susan climbs a tree and finds a way to fall down and twist her ankle.

At the exact same time, a bridge collapses and buries the ship.

Leaving the girls behind, the men go off to explore a warehouse. They hope to find something they can use to cut the collapsed bridge and get to the Tardis.

Inside the warehouse, Ian looks out a window and sees significant changes to the London he knows. While he looks, the Doctor finds a calendar. It is the year 2164!

Barbara goes to the river to get some water. She plans to wet her kerchief and use it to sooth Susan's ankle. When she returns, Susan is gone, and a man tells her Susan has been taken, and that she needs to follow him quickly.

Back in the warehouse, the men find a man with metal implants on his head. But the man is dead. Murdered! They hear a noise form above and go investigate.

Outside, they see a flying saucer.

Barbara finds Susan, who is being carried by a man.

The men find their way back to the Tardis, and the women are gone. The women are taken to a hiding area full of paranoid men.

Ian and the Doctor find they are being watched by robo-men -- Humans just like the earlier dead man, with metal implants.

They try to escape, only to find themselves staring down something emerging from the water - A Dalek!

Ok, it's official. I hate this episode.

As I watch these episodes, I take notes, writing things I want to remember for this project. Not this one, though. Oh, no. It took three times to do it. I start out watching, pen in hand, and just get sucked into the story. I want to write things down, but what is onscreen is drawing me in, saying "Watch me! Watch me!"

Finally, during the third viewing, I was able to draw myself away and start taking notes. A few observations --

1 - The Thames? Nice. It's a river that is used frequently in Doctor Who, notably in The Runaway Bride, when the Doctor and Donna drain every drop of water from the river.

2 - I get it, early Cybermen. But the *real* Cybermen are so much cooler. Bring on Tomb of the Cybermen!

3 - The chemistry of the cast is perfect. These are the ones you want by your side in any adventure. It's what makes what happens in episode 6 all the more heart-breaking.

4 - Once again, Terry Nation shows he knows how to write a cracking good episode. No, I don't really hate it. I love it.

One a personal note, if all the Dalek stories could be so strongly-written, I think they would be a lot better. As time went on, especially in the seventh and tenth doctor-eras, the Daleks became little more than jokes, or fodder. Here, its the classic Daleks (and classic Cybermen, coming up soon), and they do make the best bad guys.

The Dalek comes out of the water and begins questioning the Robo-men, asking why Ian and the Doctor have been allowed so near the river.

Wheelchair-man has constructed a bomb. He claims it will destroy the Daleks.

The Doctor and Ian are at the heliport, discussing their previous adventure with the Daleks. Ian is confused, thinking them destroyed on Skaro. The Doctor reminds him that was about a million years in the future. It hasn't happened yet.

The prisoners are loaded into the saucer.

Back to the rebels ... Susan and Barbara are talking with one of the rebels, a man named David, and with the only female rebel, Smurfette - Oh, sorry, Jenny - and they get a crash course in Earth history since the Daleks arrived.

Barbara points out how easily the rebels could disguise themselves as Robo-men with their captured equipment, and slip into the heliport and use the bomb.

The Doctor escapes from his cell, only to be taken to be robotized.

The rebels attack, while the Doctor lies unconscious on the operating table.

Lots of budget-stretchers are at work here, from the cut-out prints of the Daleks (making it appear there are considerably more of them than there actually are), to a set that is just one single wall (the cell) to the apples that, well, aren't. (cheaper to use wax apples which don't need to be replaced, since the actors aren't eating them). Combine them all, and this episode looks like it has a much bigger budget than it really does.

There is also a lovely bit of SCIENCE! towards the end, when the Doctor tries to escape his cell. Listen up, kids, you'll learn things from this show.

Episode 3
The Dalek Invasion of Earth, episode 3 - "Day of Reckoning" originally aired 12/05/1964
Written by Terry Nation
Directed by Richard Martin
David and Tyler, dressed as Robo-men, attack the "real" Robo-men who are menacing the Doctor and free him. The other rebels free the remaining prisoners.

Because Ian was jealous of Susan and the Doctor's previous adventure with the Daleks, he lets himself get trapped again on the saucer.

Whilst hiding from the Daleks, Susan and David begin to fall for each other. He takes on a protective role, and she begins swooning over him.

There is a long sequence showing Barbara and Jenny taking wheelchair-guy to the new rebel hideout, and I'll talk more about it in comments.

While Jenny and Barbara watch, wheelchair-guy goes out and gets himself killed by the Daleks.

The Doctor reunites with Susan and David. She tries to comfort him, but he's still under the paralysis he'd been suffering since getting knocked out on the saucer. Their reunion is broken up when Robo-men bring in a ticking bomb and set it only yards away from the group.

Wheelchair guy's name is Dortman, but it took me awhile to remember that. He doesn't really add anything to the story, but gives a reason for the tour of London.

There is an awful lot of padding with those three - Barbara, Jenny, and wheelchair-guy. It's amazing, being able to see a deserted London, including Westminster, an icon we see a lot of in Doctor Who. With only our little cast of characters and a handful of Daleks, it's just amazing. I mean, today we'd be able to do something like that with CGI and greenscreen, but in the 1960s? That they were able to do this at all was unbelievable. And what at first seems like script padding quickly evolves to show just how powerful the Daleks are, and how in control they are.

The script is still brilliant. There are only three episodes left in the serial, and none of the wandering around aimlessly nonsense that infiltrated the previous Daleks serial.

It's sweet, seeing Susan and David beginning their relationship. But it's frustrating at the same time. The sweet old lady in Aztecs, Susan here, we keep missing opportunities. And at some point, that means we get the abysmal companion known as Mel. And that's just sad.

The Doctor passes out; David and Susan disable the bomb.

Ian and a rebel named Larry have escaped the saucer. They see a group of slaves being forced to work by the Daleks. In a quarry! As they watch, they are approached by Mr. Rumbold.

Barbara and Jenny get a truck working and use it to travel quickly, driving over an empty Dalek.

Um, basically, it's the characters being separated and wondering around aimlessly. Three trivial things happen - we get to see the first ever use of a rock quarry in Doctor Who, we get to see Nick Smith (Mr. Rumbold from Are You Being Served?), and for the first time, somebody other than the lead plays the Doctor. In this case, Edmund Warwick plays him - at least, his back, for about a minute.

It's rather like episodes 5 and 6 of the previous Dalek serial, with the Doctor not present (Hartnell was injured in the filming of the previous episode, the character is shown here for just a few seconds, from the back).

Beyond those tiny bits of trivia, the episode is completely forgettable. I had to stretch just to find anything to say about it other than "Next!"

Ian spots Barbara and Jenny talking to one of the Dalek guards and follows them to the control room. He hides, but finds himself in a ... canister? or something that's going to go boom.

Nothing happens here. Episodes four and five could oh so easily have been eliminated, and with about 15 seconds of exposition added to the end of episode 3, no one would notice the episodes were gone. It's like a brilliant four-part story told in six parts.

Man, Terry Nation is both one of the best Who writers, and one of the worst. When he's "on" no one can touch him. When he's off, no one would want to.

Barbara, in the control room and surrounded by Daleks, presents a history lesson that would make any Star Trek fan proud. Remember Captain Kirk's explanation of Fizzbin? Yeah. Like that, only with Earth history. The Boston Tea Party, Indian Mutiny, American Civil War, Hannibal in Italy, etc., but it doesn't work. She and Jenny are placed in a hold, like the Doctor and Susan were in the earlier story.

The Doctor and Tyler find their way to the control room and free the women. Together, they use the Robo-control to order the Robo-men to turn on the Daleks, which they do with gusto.

The bomb goes kablooey and the Daleks' ships are destroyed. Earth is free from the invaders.

Seeing how much Susan loves David, the Doctor and the teachers quietly enter the ship, locking Susan out. He gets on a speaker and tells her good-bye, then they leave Susan behind.

First, the trivia. The Doctor's good-bye speech to Susan, cut in places to remove actual references to her, was used again to begin the twentieth anniversary movie The Five Doctors. In that way, each of the five actors who played the role appeared somewhere in the special.

This is the first time we lose a companion, and while it's happened dozens of times since, this is where it all started. I don't blame Carole Ann for wanting to leave. She was promised a very special role, and ended up nothing but a helpless screaming girl, about as far away from the character's original premise as one can get.

The story follows what is becoming a pattern with Terry Nation scripts. Three brilliant episodes, padding where the characters walk around lost, in differing combinations, then coming together for a brilliant final episode.

We know Susan is the Doctor's grandchild. Did she survive the Time War? Where did she go after David's eventual death? He is just a Human, while she's got 13 lives. So much about her is unknown.